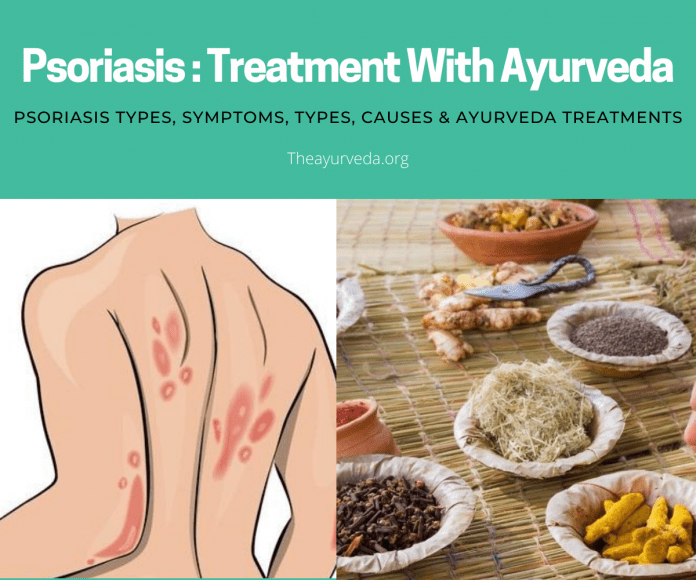 Skin diseases are so common these days. Some exist because of lifestyle, some as a result of drug reactions and some may have a genetic cause. But any one of these three may become cause for Psoriasis. this article is focused on Psoriasis symptoms, Psoriasis cause, Psoriasis types and Psoriasis Ayurveda treatment.

What type of skin disease is psoriasis?

Psoriasis, is a long term (chronic) skin disease. It is often characterized as auto-immune disease. Auto-immune is a disease in which body’s own immune system mistakenly attacks itself.

It is characterised by patches on the skin that are often bumped,rough,red and have scaly-stacked appearance.

What type of scally appearance and why they appear?

The meteoric process of skin production leads to psoriasis. In psoriasis, skin grows 10 times faster than normal. This excessive and rapid growth of skin cells is the cause of skin’s scaly appearance.

You must be questioning,why? Well in our body skin cells grow deep inside the skin. They slowly come up to the surface and eventually fall off. This cycle is normally completed in 1 month. Whereas in the case of  psoriasis this process may take only few days.

As the result skin cell remain adhered to the surface because they don’t get enough time to fall off. The ‘overabundance’ of skin cells leads to the formation of a pile over the surface and gives the ‘scaly’ appearance.

What are the areas affected by psoriasis?

Scales may grow anywhere in the body, but the most affected parts are :

Areas that are less affected are:

This skin disease can be characterized into 5 different type:

Appearance –The patches may vary from few to many. Dry, raised, red skin patches covered by silvery scale.

so, You may experience itchiness and tenderness.

According to configuration plaque psoriasis can be further classified into 3 categories:

Type 2 : Guttatepsoriasis (Most common in children)

Sign and symptoms of psoriasis may vary from person to person depending upon the type of psoriasis and age group.

Any of these symptoms may stay for few days and then may clear up unnoticeably. But after few days or weeks symptoms may appear again.The reason may be psoriasis triggers.

However, sometimes symptoms of psoriasis disappear completely and you may have no active signs of the same. This is known as remission, which means you are symptom free. But don’t be carefree, it doesn’t mean that you can’t have psoriasis again.

Symptoms range from mild to severe. They are present differently according to type of psoriasis. According to National Psoriasis Foundation:

The exact cause is still a matter of research. However, genetic and immune system are two factors which are considered as cause.

It means you can inherit psoriasis from your ancestors. That is if someone in your family tree had psoriasis, then there is a chance that you too may develop it. But according to National Psoriasis Foundation only 2-3 % of people genetically develop this ailment.

Immune system guards your body from infection and diseases. White blood cells (W.B.C) also known as T-cells prevent us from falling sick. They attack on harmful bacteria, viruses and other pathogens and thus protect us from diseases.

When psoriasis occurs, the T-cells mistakenly start attacking body skin cells. This process of mistakenly attacking body is known as autoimmunity. Because of this, body makes new cells more often. Excess cells don’t wither away but pile up causing psoriasis.

After knowing all this, if you are scared to touch anyone who is suffering from psoriasis;then you must not be scared. Psoriasis is non-communicable (non- contagious) disease.

In other words, it will not spread through touch. So never distance yourself from the person who is suffering from psoriasis

But Keep in mind :

Reduces scaling , itching and inflammation. Are available in form of cream, oil and many more forms.

It is the first line treatment for moderate to severe psoriasis. Therapy can be given alone or in combination with other medicines. This therapy uses UV rays. In this, affected skin is exposed to controlled amount of natural or artificial light. The over reactive W.B.C that attack healthy skin cell and cause rapid cell growth are killed by sunlight or artificial light.

Drawbacks: are expensive, may or may not be covered by health insurance plans. As they alter immune system there is high risk of getting serious infections.

Caution : Should not be recommended during pregnancy and breast feeding

it is classified under ‘Kushtha’ a skin disease mentioned in Ayurvedic texts. It occurs due to imbalance in three doshas- Vata, Pitta and Kapha.

Doshas when stable form the body. When are disturbed, they cause a disease. They can cause disease alone (alone vata, alone pitta or alone kapha) or together (vata,pitta, kapha like in psoriasis)

Vata : When stable it controls body functions like respiration, excretion and many more. It’s properties include dryness and roughness.

In psoriasis, it is responsible for causing dryness and scaling of skin.

Pitta : When stable, it controls the heat of body and stomach (jatharagni). It’s properties include heat, burning.

In psoriasis, it is responsible for causing redness, inflammation and burning sensation.

Kapha : When stable, it provides body stability, patience energy and many more things to body. It’s properties include coldness, heaviness, roughness and many more.

In psoriasis, it is responsible for causing whitish silvery appearance, itching, and thickning of skin.

Some often relate Psoriasis with ‘Kitabha’ and ‘Ekkusth’ (diseases among 12types of skin diseases mentioned by Charaka. [Ref: Charaksamhita chi 7/21,22] )

Kitibh :is described as a skin disease which is blackish red in colour and is rough to touch.

Kitibh can be compared with Inverse psoriasis as it posses bright red inflamed patches.

Ekkushth : is described as a skin disease which covers large area, have fish like scales and have no sweat.

Ekkushth can be compared with Erythrodermic psoriasis as in it scales wither away in large sheets. There are patches that are often covered witch silvery scales.

Cause of Psoriasis or Kushtha according to Ayurveda

Is it curable in accordance with Ayurveda?

However it is further mentioned ( Ref: Charaksamhita Chi 7/38) :

Ayurveda treatments are based on balancing the doshas. Doshas can be balanced by:

In Ayurveda, Panchkarma is considered the best way for detoxifying the body. Panchakarma focuses on removing aama( toxins) from body. When any  disease occur Vata, pitta, kapha undergo aggravation or disarrangement. Disarrangement of these affects agni ( gastric fire) and produces aama( toxins).

This aama enters blood stream and is circulated throughout whole body. Aama blocks the channels in body and results in disease. So, every disease is caused by aama. To remove aama 5 things known as Panchkarma are done.(Ref: Shushruta Samhita)It consists of-

Before these purvakarma(pre purification measurements) is done.Purvakarma prepares the body for purification. It includes two process:

Snehan liquefies the toxins and increases the movement of toxin in gastrointestinal tract (GIT). It also make superficial and deep tissues soft thus,help to remove stress and nourish them.

Swedan liquifies toxins and increases the movement of toxins towards GIT.

After that, these two procedures 5 karma’s are done. Let’s see what are their benefits.

Vaman– It is a therapeutic vomiting, done by oral intake of medicinal preparation. Vaman helps in stabilising aggravated kapha dhosa and dislodges toxins from body. In psoriasis, kapha is imbalanced vaman therapy helps.

Moreover, it is a good treatment for chronic skin diseases like psorasis.

Virechan- It also removes toxin from blood and purifies the blood. It is mainly indicated to regulate pitta and this helps in digestion and metabolism.

Vasti- It is recommended as purification therapy for Vata.

The above three help in stabilizing dosha which in turn benefits in psoriasis.

Nasya– Inhalation of medicated oil through nostrils is known as nasya. It also eliminates toxins.

In psoriasis,(Kushtha) nasya of powdered Tulsi seeds, peppercorns along with other herbs can be given ( Ref: Charaksamhita : 7/48)

Raktamokshan- It is also known as blood letting. Toxins present in blood are removed by a cut made over the affected part. Specialized instruments  are used in raktamokshan.

In some cases leech therapy is also used.

Pomgame oil tree (commonly known as karanj) and mustard oil can be applied to the affected area.

Aloevera gel can be applied too. It relieves from itching and scaling.

Olive oil can be applied directly or can be added in bath. It eases dryness and itching.

As you know stress triggers psoriasis. It can also induce inflammation too. Further, inflammation can aggravate psoriasis by flaring it up or worsening the one already in process.

Yoga and meditation act as best stress buster. Yoga also helps in smooth blood circulation across your body. It helps to inflate lungs with pure air.

For countering psoriasis symptoms you can:

Meditation Padmasana is the pose for meditation. You can meditate in anjali mudra, bhairvi mudra, gyan mudra and many more.

Lets discuss about Padmasana and mudras.

“ Focus your attention on your heart and then see yourself enormously beautiful, wonderful and mysterious that are there.” – Daaji ( Heartfulness, sahajmarg)

It is a good start for beginners. Above all, This improves lungs and blood circulation.

Yogaasana For relaxation you can do child pose. It is the easiest one.

As a result you can yourself conclude that psoriasis can’t be fully treated.

Proper diet and hygiene can help you.

Whereas, ayurvedic treatment has negligible side effects. They also help you in living a healthy, positive and disease free life.

In conclusion, Hope you liked this article to clarify Psoriasis symptoms, Psoriasis cause, Psoriasis types and Psoriasis Ayurveda treatment. Comment your feedback, suggestion and Query related to Psoriasis !