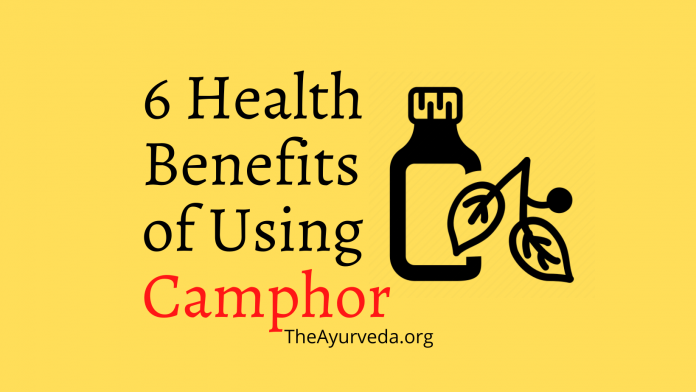 Camphor is a compound that is used in creams, ointments, and lotions all include this ingredient. Camphor oil is a steam-distilled oil that is derived from the wood of camphor trees. It can be applied topically to treat pain, itch, and irritation. Camphor is also used to treat inflammatory disorders and chest congestion. Camphor has a special place in a temple as well.

It has a strong odor and flavor, and it absorbs quickly through the skin.  It has the potential to cause negative effects, especially when taken in large amounts. Camphor should never be used internally or applied to injured skin because it is poisonous. Whether for religious ceremonies, as a room freshener, or in the form of essential oil, the strong fragrance of camphor is loaded with healing properties, while also being known for spreading positivity. Camphor used to be made by distilling the bark and wood of the camphor (Kapur) tree. Today, camphor is chemically manufactured from turpentine oil.

Camphor seems to stimulate nerve endings that relieve symptoms such as pain and itching when applied to the skin. Camphor is also active against fungi that cause infections in the toenails. In the nose, camphor seems to create a cold sensation so that breathing feels easier. These days it is also produced artificially from turpentine oil.

Camphor has a wide range of uses from health to perfume to even keeping ants away. Camphor trees are evergreen and belong to the laurel family. They can grow as tall as 40 meters and can live up to 1000 years.

Camphor Is Beneficial To Digestion

Camphor stimulates and improves the digestive system’s performance. It improves the secretion of digestive juices and enzymes, which is necessary for a smooth digestion process. It also avoids gas development and the complications that come with it. There is no surprise that it is an effective treatment for diarrhea, gastroenteritis, and other digestive problems.

Camphor is an anti-inflammatory agent

Camphor has been shown to be a powerful anti-inflammatory. Apart from being active in Ayurveda and other kinds of alternative treatment, this property of the chemical has earned it a common name in mainstream medicine.

Benefits of Camphor for the Skin

Camphor can be used to treat a variety of skin conditions. It relieves itching and irritation, soothes burn injuries, dermatitis, nail fungus, cracked heels, and gives pain relief. Due to its beneficial properties, it is often utilized in a variety of skincare products.

The distinct scent of the camphor helps ease nasal congestions and trigger an open and smooth airflow. Those people who suffer from frequent coughing can use camphor to seek relief. For chest congestion, use camphor oil. The pungent odor of camphor is a powerful decongestant. It aids in the removal of phlegm and mucous from clogged bronchi, throat, and other airways. Camphor is used in decongestant balms and cold rubs for this purpose. These drugs provide a lot of relief when rubbed on the chest and throat.

There is enough evidence to prove that the severity of osteoarthritis symptoms reduces by about half when one applies camphor to the skin and over stiff joints. Researchers firmly believe that camphor is the ingredient in most ointments that improve arthritic conditions and joint pains.

Spasms and cramps can strike at any time and without notice. The discomfort might be unbearable. They can even occur when you are sleeping. Camphor oil is the most effective treatment for such unpleasant situations. Spasms and cramps are common during pregnancy and spasmodic cholera. Massage with camphor oil might help to relax and soothe muscles.

People use camphor for a variety of purposes, including medicinal, aromatic, and many others. It’s a repellent for ants. This explains why we use it in a variety of sweet foods. Perfumes and balms also have some percentage of it.

Camphor is safe and helpful when used and consumed in moderation. There is a greater risk of camphor poisoning if goods are used in regions where the skin is gaping or open sores. Camphor inhalation is safe up to a point for clearing blocked airways. Higher quantities of camphor ingestion or inhalation can be extremely hazardous and even fatal. It is highly flammable, so use it with caution. Last but not the least, never apply camphor oil directly to the skin.

Always dilute it with oils like olive oil, coconut oil, wheat germ oil, or almond oil. Camphor poisoning causes burning in the mouth and throat, as well as nausea and vomiting. Camphor should be kept away from children because they are more susceptible to its toxicity and may not be able to tolerate it.

How Fenugreek seeds can keep you healthy

Make your own Camphor oil for Migraine and Headache