Endometriosis is a complex and painful disease affecting women in their reproductive years. The name “Endometriosis” comes from the “Endometrium” which is the tissue that lines the inside of the uterus and is built up and shed away every month during the menstrual cycle. Endometriosis means the abnormal growth of endometrial cells outside the uterus leading to the development of endometrial tissue which is called nodule, implant, lesion or a tumor. 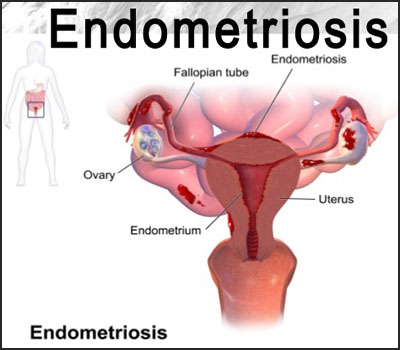 The endometrial lesions first appear as clear vesicles, then become red and then black over a period of 7-10 years.

What are the symptoms of Endometriosis?

Endometriosis according to Ayurveda
According to Ayurveda, all the three doshas (Vata, Pitta, and Kapha) are involved in endometriosis. Vata is involved in a number of ways. The role of Vata is in the displacement of endometrial cells from their original location in the uterus to the outside places. The painful nature of the disease can also be attributed due to Vata dosha. There are 5 sub-types of Vata that govern and direct all movements of the body in 5 directions- upwards, downwards, outwards and around. One of the most influential of these is Apana Vata, it is the downward moving wind that governs the initiation of all elimination pulses including bowel motions, urination, childbirth, and menstruation. The blockage of Vata dosha creates pain so painful menstruation is the most common symptom of endometriosis. The involvement of blood, hormones and inflammatory nature of the disease is due to the imbalance of Pitta dosha. Kapha is responsible for increasing buildup of cells and their growth like a tumor.

Ayurveda believes that Endometriosis may also occur when Ama (toxins) accumulate in the tissues and start to disrupt the balance of tissues as toxins that build up obstruct the channels of circulation and elimination in the affected areas thus preventing the proper nutrition from reaching the tissues which prevent the removal of tissue waste. As a result of toxic build up in the body, the natural defenses are lowered and the biological rhythms are disrupted.

In this disease, the process of tissue formation at the uterus, its stability, and elimination of waste products fails to stimulate fresh tissue formation. Ayurvedic treatment of Endometriosis includes – balancing Vata (especially Apana Vata), Pitta and Kapha, strengthening the digestive fire and eliminating toxins. There are specific ayurvedic herbal remedies that are used to alleviate pain, break up the blockages, reduce inflammation, treat heavy bleeding and reduce the accumulation of endometrial tissue outside the uterus and also reduces any scar tissue that has formed.

Ashoka is an important Ayurvedic herb used mainly in bleeding gynaecological conditions. The word “Shoka” means grief and the word “Ashoka” means that relieves pain and grief of women. Master Charak has classified Ashoka under an astringent tasting group of herbs. It balances Kapha and Pitta. It is coolant, absorbent, a natural detoxifier, relieves growth and useful in bleeding disorders.

Lodhra is a very important Ayurvedic herb which is used mainly for bleeding disorders. Its references are found since the time of Sushruta. Due to its astringent and bitter tastes, it balances Kapha and Pitta. Its decoction is given in a dose of 50-60 ml to treat uterine bleeding disorders. It is considered as a uterine tonic.

Shatavari acts as an excellent tonic for women. It also calms the mind, induces sleep and much more. It balances Vata and Pitta doshas in the body. It has cold potency. It is quite useful in bleeding disorders like – endometriosis. Improves nourishment in females. Anti-inflammatory thus helps in reducing swelling caused due to endometriosis, and balances the hormones.

Turmeric is one of the most effective anti-inflammatory herbs. It helps in reducing the inflammation and pain without any side effects. Turmeric is an analgesic herb also. It also helps to improve the blood circulation.

Giloy is an important immune-modulatory herb. Ayurvedic practice without this herb may not be possible. It is also an important ingredient of various Ayurvedic medicines. It is known to possess healing properties. Endometriosis is also caused due to Ama (toxins) formation. This herb acts as a natural detoxifier (Ama- Nashak) and also acts as a digestive stimulant.

Kumari (Aloe vera) – “Kumari” refers to a young girl. It is used in the treatment of the diseases of young girls like – pimples and menstrual problems. The beauty of Aloe vera can be matched with the beauty of its health benefits. One thing must be considered that benefits of this wonderful herb are not limited to cosmetics. Aloe vera improves ovulation chances and induces menstruation. It also detoxifies the blood. Useful in treating Vata dosha imbalance. It has cold potency and balances all the three doshas.

Malabur nut (Adhatoda vasica) – Malabur nut has effective anti-inflammatory and analgesic properties which helps in relieving pain and also helps in controlling excessive bleeding. In all types of bleeding disorders, usage of the malabur nut is recommended.

Chandan (Santalum album) – Sandalwood is a coolant which is very useful in the disorders caused due to Pitta imbalance. It balances Kapha and Pitta doshas. It is useful in bleeding disorders and also detoxifies the blood.