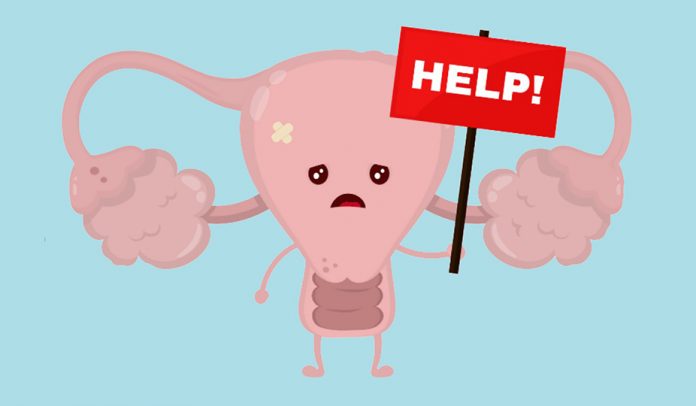 Have you ever thought you can have same cells as uterus anywhere in your body? Of course not but to your surprise it can happen. It is a medical condition termed as endometriosis.

Endometriosisis,a disorder found exclusively in females, as men aren’t gifted with uterus and can’t bring a new life on earth. Imagine if they could.

In endometriosis, similar tissues that form uterus lining are found outside the uterine cavity. This phenomenon is absolutely abnormal and needs medical attention.

The lining of uterus is known as endometrium. The endometrial tissue consists of cells, blood, glands and connective tissue. This layer prepares your uterus to develop the environment suitable for pregnancy. On contrary, it sheds off during menstruation.

In endometriosis these tissues may develop in organs like ovaries, uterine tubes and pelvic lining. Sometimes they may develop beyond pelvic organ which is very rare but not impossible. The tissue growing outside the uterus is known as endometrial implant.

These implants are a kind of mislaid tissues which are affected by hormones during menstrual cycle. During menstruation they grow thick and ultimately break down. This broken tissue has no way out and is thus trapped in pelvis.

The exact cause of endometriosis is not known yet, though some theories are considered in spite of not being scientifically proven. These are-

In retrograde menstruation, blood containing endometrial cells revert back into pelvic organs instead of moving out of the body. This leads in development of endometrial fragments in other sites than uterus.

Amazed? Right? Well there is a lot more disease that will leave you awestruck.

In coelomic metaplasia, coelomic epithelium transforms into endometrial type of tissue. This transformation may occur spontaneously. Chronic inflammation is one of its cause.

Yes, yes you’re thinking right all this process can start with your birth.

Defect in local cellular immunity, can sometimes be the possible cause for misplaced growth in susceptible woman.

Endometriosis depending upon factors such as depth, areas affecting body can be grouped into following 4 stages-

When to seek a doctor?

One should keep in mind that endometriosis can affect patients as young as 18. You should seek doctor if you have any sign or symptoms that may indicate endometriosis.

It is a challenging condition. Its early diagnosis may results in better management of symptoms.

Endometriosis is a serious condition that can disrupt your life. Thus, needs to be treated soon . Although it can’t be fully cured, but can be managed depending upon symptoms. One can be relieved by –

In this laser technique – laparoscopy is used to remove growth surgically. Sometimes misplaced growths are burnt or vaporised.

In this surgery uterus, ovaries and cervix are removed. Ovaries are removed because their secretion provide environment for growth of endometrial tissue.

Endometriosis is not directly mentioned in Ayurveda, but depending upon sign and symptoms, site of it’s manifestations and many more things it can be relieved through ayurveda.

Are you thinking how is this possible if it is not even named? To your answer let me tell you it is mentioned in Ayurveda text that even if a physician is unable to name a particular disease then a full knowledge of the therapeutic properties of doshas, site of it’s manifestation, etiological factors would never fail his attempt to cure a disease ( ref: Charak samhita – SU18/44)

In Ayurveda, endometriosis can be considered a tridoshaj vhayadhi which is a disease involving all three doshas ( vata, pitaa, kapha).

All the diseases and their treatment in Ayurveda revolve around these 3 doshas. When these 3 doshas are stable then there would be no disease.

Why vata is involved?

Roughness,dislocation, attachment, divisions,pain is the characteristic feature of vata disease.

In endometrioses misplaced cells, their attachment to organs other than uterus and piercing pain proves vata involvement. Also retrograde menstruation suggest the improper working of Apaanvayu. ( Apan vayu is a type of vata which is responsible for excretion of body wastes, helps in discharge of semen and menstrual blood.)

Why pitta is involved?The inflammation, hormonal imbalances and excessive bleeding during menses indicate the involvement of pitta.

Why kapha is involved? Because the cells of misplaced endometrium are like tumor. And tumor can’t occur without kapha.

These 5 actions help in detoxifying the body and in stabilizing doshas. These are applied depending upon the person and their ailment.

In endometriosis all three doshas are involved which need to be stabilised. Moreover body should be detoxified.

Aloe vera : Clinical studies show that it can be used in treating endometriosis. It is rich in Vit A,B,C,E and also contains Vit B12. It boosts healing and its anti inflammatory property helps easing pain associated with endometriosis.